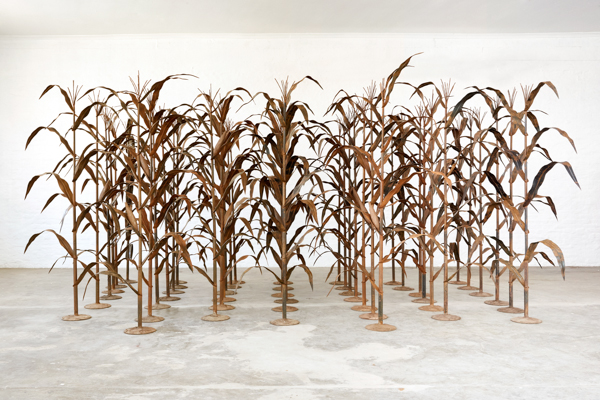 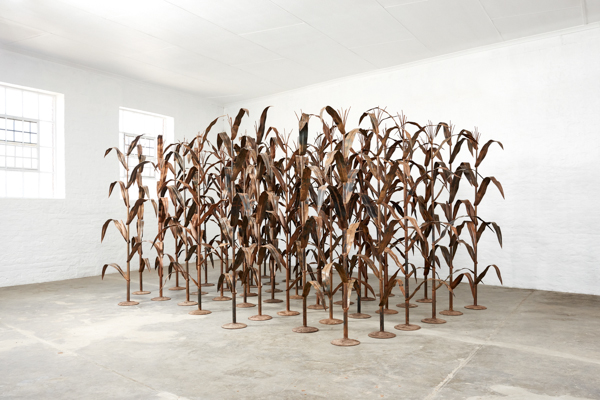 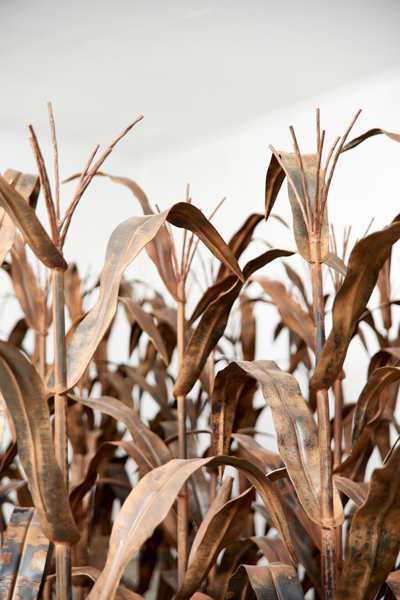 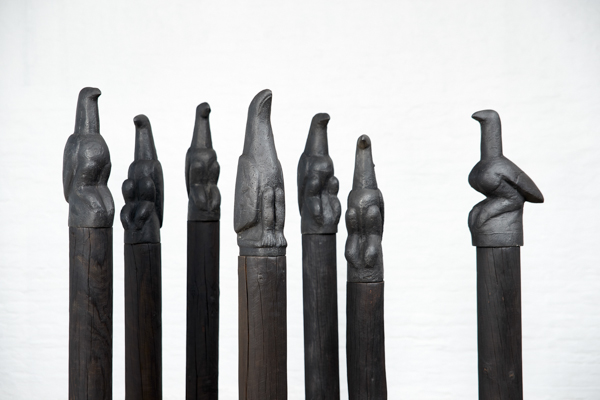 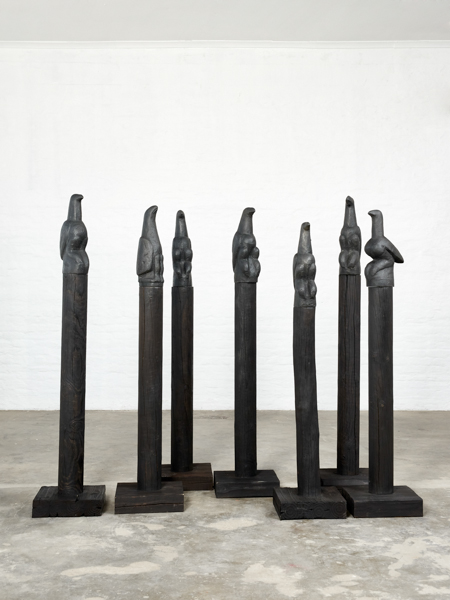 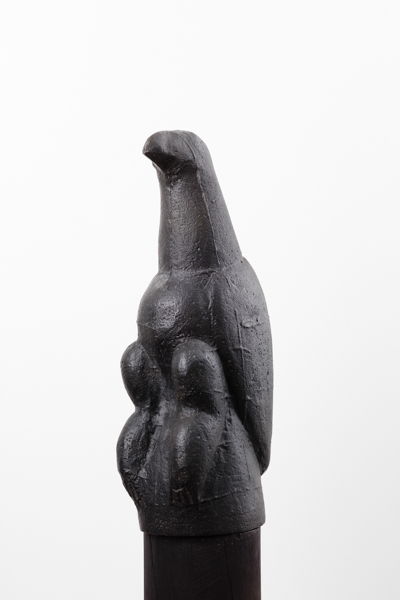 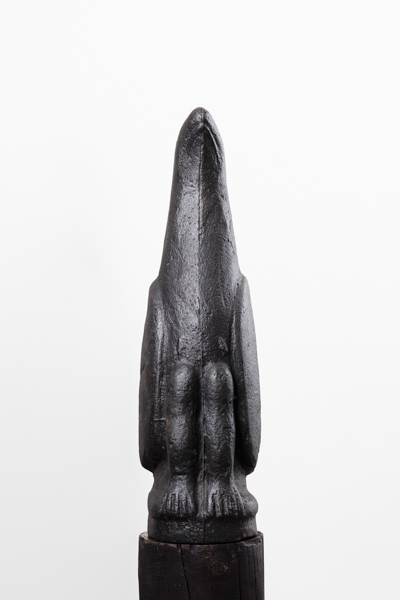 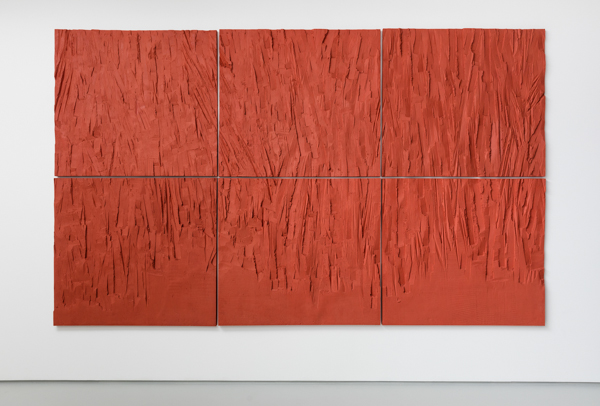 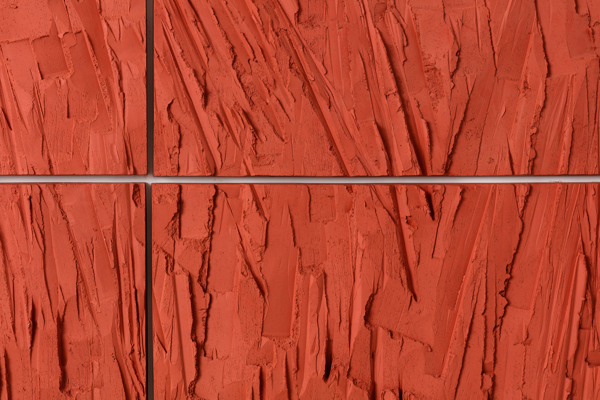 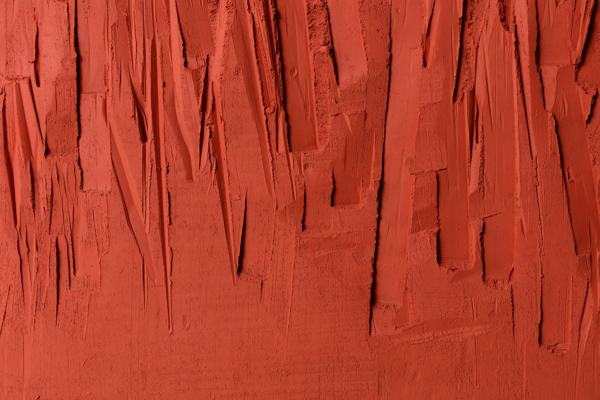 Through the manipulation of various materials, Mathison transforms everyday objects into charged artistic declarations. Informed by his own migratory experience, living primarily in South Africa and Zimbabwe, his sculptures and installations form a visual language commenting on both the personal and political. The exhibition brings together tools, objects and symbols that shape cultural and political identity in South Africa and Zimbabwe.

In Plot, maize plants intricately crafted in steel form a visual field in the gallery. As the staple food of the region, small plots of land planted with maize are a regular sight in rural and urban surroundings. Placed out of context and devoid of function, the inherent monumentality of the crop is revealed, intensified by the ornateness of the sculpture and hardness of the metal used; it is at once an inviting image of domestic survival and a definitive, if decorative, boundary within the space. The work becomes a sculptural expression for universal concerns such as migration, land ownership and cultivation, whilst providing a metaphor for the cycle of life.

Archetypal stone-carved Zimbabwe birds in the series Chapungu, Shiri yedenga (sky bird) are reinterpreted in cast iron and placed on wooden gum poles providing a modern day perch. Emblematic of the country’s history and identity, the birds are layered with political and spiritual connotations.

Originally created by the Shona people for the walled city of Great Zimbabwe, during the 13th and 14th centuries, it is believed that the birds were used to communicate with ancestral sprits, the cornerstone of Shona religious belief. The carvings were removed by British colonisers and treasure hunters during the later part of the 19th century. Under the patronage of colonialist Cecil John Rhodes, several of the birds were taken to South Africa - only to be repatriated to Zimbabwe following independence in 1980. Rhodes himself tried to use the birds as evidence of some kind of Phoenician or Egyptian pre-colonisation. The works become not solely a comment on movement across cultural and national borders, but also the manipulation of patriotic and personal identity by the physical, often brutal, uprooting and repatriation of historical symbols.

Other highlights from the exhibition include the wall-relief work, Lost ground. Several metres wide in cast gypsum, the work reveals markings made by tools digging into the ground. The highly textured surface of the work is suggestive of earth that has been scraped and pierced. Memorialising the beginnings of cultivation, or destruction and construction, Mathison’s work again plays between ideas of nurture and growth, whilst reminding us of the violence often associated with the appropriation of a country’s mineral resources.

Together, the works in the exhibition form a conversation on themes of labour and migration, a visual narrative of Sub-Saharan Africa’s collective concerns. 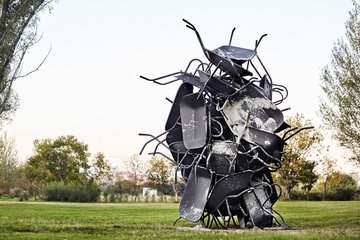 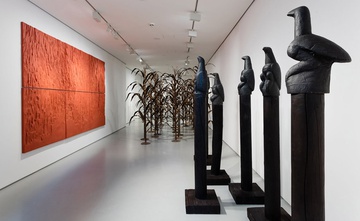