These are universals of Zimbabwean life; the way men and women translate their existence on earth.

The majority of the country’s 13 million people live in the rural areas and till the soil for their livelihoods. Preparing the fields, planting seeds and cultivating crops, reaping the produce, storing food for the coming dry season – these are annual rituals.

This agricultural work reaches into the cities – virtually everyone is linked to life in the rural areas by family and friends. Almost all Zimbabweans have a kumusha, their rural home.

I remember when Milka Ngazana, an 89-year-old Shona granny, was staying with us to recuperate from an illness. It was November, when the crackling dry heat of October is eventually broken by the life-giving rains. Clouds gathered, thunder crashed and rains fell. Milka became agitated and paced the room. “It’s raining. I must get back to my fields. It is time to plant my seeds,” she said.

We tried to persuade her that her son and daughter-in-law would be taking care of her plot. “No. I must be there,” she insisted. “I need my badza (hoe). I must be in the fields.”

The next day we drove Milka to her to her farm in Seke, south of Harare, and she was out in the damp fields as we departed.

Family members said she worked more slowly and cultivated less land, but she remained a superlative farmer. She had a good harvest. It was her last.

Maize is the staple food, Zimbabwe’s grain of life. The maize crop determines what is a good year or a bad year. Maize meal is the essential to every meal. Taguta – the Shona word for satisfied – is what people say when they have eaten their fill. And a meal based on sadza – a stiff maize porridge – gives a special sensation, as it swells a bit when in the stomach.

These are elements that touched Michele Mathison’s life growing up in Harare and Bulawayo.

Throughout his career as an artist, Mathison has taken ordinary things of southern Africa life and examined them through his sculpture. Using various mediums including ceramic, steel, resin and found objects, he recreates them and assembles them to highlight their exceptional, spiritual qualities. Aloes, barbed wire, telephones and pick axes have all been transformed into symbols conveying the richness of contemporary life in southern Africa.

As a Zimbabwean artist, raised and schooled there, Mathison explores and illuminates daily life. Zimbabwe is where he first began drawing, painting and sculpting, in classes by Helen Lieros at the Delta Gallery and at Prince Edward School. He further honed his skills at the University of Cape Town’s Michaelis School of Art where he studied under Jane Alexander and Gavin Younge. His accomplishments were recognized with the class medal award for sculpture in 2000.

His art has flourished in Johannesburg, with significant stays in Zimbabwe and Mozambique. He expresses his appreciation of the lively, shocking, tragic, uplifting mosaic of life in southern Africa, where the neighboring countries are each different yet all intertwined. Post-colonial. Post-independence. Agricultural, rural and urban.

His years as a cameraman for CNN correspondent Bob Coen sharpened his graphic eye and also exposed him firsthand to the region’s harsh, historic and, occasionally, elevating events.

As an artist, Mathison responds to contemporary southern African life as a documentarist. His southern African re-interpretation of Arte Povera lifts mundane objects and explores how they shape life. It is an approach dramatically different from some South African artists who respond satirically and ironically to current events.

As one of the artists representing Zimbabwe at the 2013 Venice Biennale, Mathison has reached further to express the essentials of Zimbabwean life with his elemental installation, Harvest.

Tree stumps, maize cobs and hoes become metaphors for the cycle of life in Zimbabwe.

Landscape – a collection of tree stumps that are cast from charcoal and resin evoke the clearing of fields for cultivation. They are also reminiscent of trees that are burned to make charcoal, a major economic activity in rural areas. The stumps also conjure images of Zimbabwe’s land upheavals, yet they reach beyond that to affirm the continuity of life. From stumps come new life, shoots and growth.

Arms, thighs and torsos reach out suggestively from the stumps. The truncated forest conveys the alpha and omega of life.

Chibage (Shona for maize) – consists of more than 1,000 handmade ceramic reproductions of maize cobs. An homage to Ai Wei Wei’s sunflower seed installation and at the same time a recreation of the heaps of maize cobs that are seen throughout Zimbabwe’s rural areas at harvest time. After being picked from the stalks, the cobs of maize are husked and laid out to dry in the sun before storage in a granary. It is a crucial stage of the agricultural year. A large pile means full stomachs through the year. A small pile bodes lean times and hunger.

Maize is the staple food integral to life in southern Africa, but it is an imported crop, brought to Africa some 500 years ago by Portuguese from Latin America. The plump maize kernels quickly replaced the more scrawny indigenous sorghum and millet grains to become an essential element of life in southern Africa.

Ikhuba (Ndebele for hoe) – an Eadweard Muybridge-like evocation of the action of raising and swinging down a hoe to dig up the earth and prepare a field for seed. The continuing effort needed to grow more food.

The hoe is so potent a symbol of life in southern Africa that it is featured in Zimbabwe’s coat of arms and Mozambique’s flag – where it is crossed with an AK-47 rifle, a southern African version of the hammer and sickle.

Each item – stump, maize cob and hoe – has been touched by the hand of man and together they show how many Zimbabweans define their lives on earth. The objects are filled with emotion – hopes, heartbreak, ambition, disappointment, pride and love.

Andrew Meldrum is a journalist who has lived in southern Africa for 28 years, writing for The Guardian, The Economist and The Associated Press.

We are, once again, in the throes of something akin to a second industrial revolution - a time when the speed of our technological age jars against our dependency on a manual workforce neglected by the society it serves.

''The work is about recognis ing the widening social and economic gap," explains Mathison. " There are new advancements in technology and upward economic and social mobility, and yet we use 20 guys on the side of the road to dig trenches for this development."

The concrete and metal he uses are specifically chosen to echo materials used for manual labour. The materials also accentuate the parallel between workers using their hands and Mathison's process as an artist. He believes this process brings integrity to the tools - usually considered cheap and common - that are actually the bedrock of our built environment.

"I see my sculptures as small monuments to the labour workforce in Southern Africa. The socialist and c ommunist connection that developed in Zimbabwe, Mozambique and South Africa during the transformation of these countries to majority rule was marked by the idea that the workforce would be integral to nation-building. This promise has been diminished by the corruption and greed that has taken over."

Blood, Sweat and Tears is made from concrete wash basins and overalls , symbolising the washing of sweat and grime from work clothes - only to have them repeatedly sullied - and the women who wash the clothes.

The sculpture turns a wash basin into a symbol of economic status.

Mathison's studio is in downtown Johannesburg, near the hostels and informal settlements populated by large numbers of his fellow Zimbabweans , economic refugees from a floundering revolution.

"The location of my workshop, opposite an ever-expanding township with no proper sanitation or electricity, feeds into my work," he says.

Mathison has had several successful shows, including the sellout Harvest at the Venice Biennale last year. 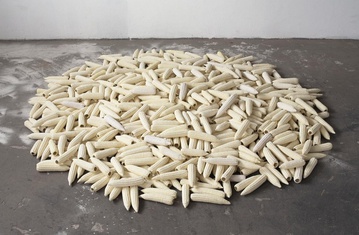 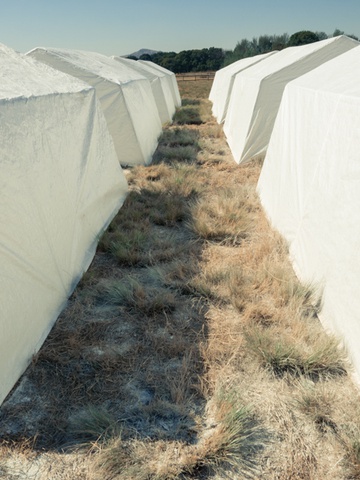